Lauren’s Circle of Strength was conceived more than 10 years ago, through the bonding of a network of family, friends, and strangers, who were inspired by Lauren’s example of unrelenting spirit and courage. A bright, motivated, talented young lady named Shea Costantino, from Bedminster, NJ, was among those who volunteered her skills to serve the mission of LFG from its infancy.

Shea began her volunteer work with LFG as a preteen, alongside her mother and aunts, who are a driving force behind the camp set up, registration and organization. Shea quickly mastered the ins and outs of data input, volunteer organization, tent management, and number running. Whatever needed to be done, Shea was the perpetual team player, ready and able to complete the task at hand.

Shea served on LFG’s original Junior Board of Directors from 2004-2010, acting as a good will ambassador for the Foundation, obtaining in-kind and monetary donations for the camps, and addressing her normal camp duties of setup, organization, registration, food and beverage distribution and sales. Shea’s camp day responsibilities expanded to overseeing and confirming the input of over 500 camper registrations and finalizing all camper registrations during that time period.

Shea went on to take a leadership role during her basketball career on the Franklin & Marshall Varsity Women’s Basketball team, leading the Lady Diplomats as Team Captain during the 2013-2014 season. In 2013, Shea was nominated for the Allstate National Association of Basketball Coaches Good Works Team and was the Vice-President of the Athletic Leadership Committee/Student Athletic Advisory Committee. She also served on various service committees during her time at F & M. Shea earned honors in 2014 on the Centennial Conference All-Sportsmanship Team, and received the Franklin & Marshall College Athletic Leadership/SAAC Sportsmanship award.

Shea is a 2014 graduate of Franklin & Marshall College, with a Major in Sociology and Minor in Women & Gender Studies. She recently accepted a position as a Coordinator at the East Central Division of the American Cancer Society in Bethlehem, PA. Her intelligence, her leadership skills, and the passion she has for her work will benefit this very fortunate non-profit organization. LFG is grateful for a very special COS member and wishes Shea much luck in her future! 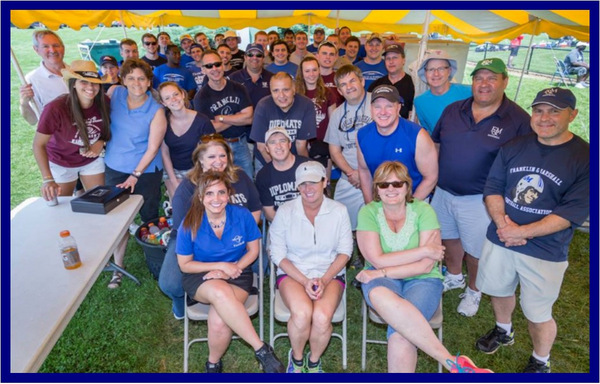 The F&M Concession Crew at LFG PA, with Shea to the far left in maroon.