Home»Circle Of Strength»Profiles»The Nish Family
Error: linkLocal = 4, but newsLink is not a numeric spot. (newsLink = )

The Nish Family
Building the COS 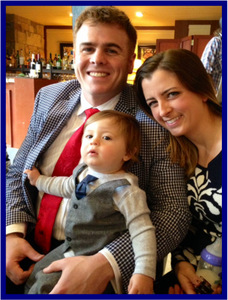 On camp day, if anyone is in need of an able body to haul equipment, lead the tent crews, organize coaches or volunteers, pick up garbage, solve a problem, resolve an issue or take charge of a project, Tim Nish is the first one to be called on to complete the task at hand.

Nish, a 2006 Lafayette College graduate and design engineer, played four years of varsity football as a defensive lineman. In 2004 and 2005, Nish was named the scout team defensive co–MVP. In his final season, the Lafayette coaching staff honored Nish with the Unsung Hero Award. Nish served as a volunteer coach at Lafayette for seven years, working with the defensive line and preparing the offensive scout team in practice.

Nish is a LFG “All Star and Chief Engineer” who has volunteered at every PA camp, and camps in FL and OH, making him an 11 year veteran.

More than six years ago, then Tiffany Muir joined the Athletic Training staff at Lafayette College after completing her Master’s Degree in Kinesiology and Health Promotions at the University of Kentucky. Tiffany completed her undergraduate work at the University of North Carolina at Chapel Hill, where she worked with the baseball, football, women’s soccer and track and field teams. Just a few months after joining the staff at Lafayette, Tiff became an integral part of the sports medicine staff at the camp. She spends countless hours helping with registration and pitching in wherever needed. She also is returning to LFG as a 6 year volunteer veteran. But that is only part of the Nish Story.

Tim and Tiffany married in the summer of 2012. In December 2013, they were blessed with their son Jameson. At the tender age of 6 months, Jameson volunteered at LFG PA for the first time in 2014, entertaining and charming all of the volunteers in the ‘war room’ and children in the Family and Friends Fun Tent area. The Nishs are truly an example of a family helping to build and better Lauren’s Circle of Strength!