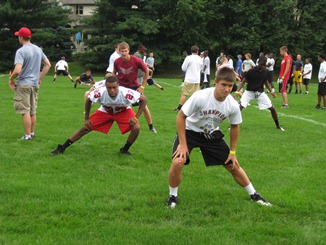 “The camp really gives myself, our coaching staff and my team a tremendous opportunity to give back in what was really a win-win for everyone,” said Otterbein head coach Joe Loth. “The student-athletes get great exposure to college coaching and evaluations, the college coaches get to evaluate these campers plus network among other college coaches, and Otterbein gets these kids on our campus. But the biggest win is the amount of money we helped raise for pediatric brain cancer research and our association with Nationwide Children's Hospital and Lauren's First and Goal Foundation.”

The camp is the primary fundraiser for Lauren’s First and Goal Foundation and all proceeds from the event go directly to its mission of providing financial support for brain tumor research and cancer services, offering financial and emotional support to families living with pediatric cancer, and increasing awareness of the disease. Locally, donations help support pediatric oncology patients at Nationwide Children’s Hospital.

“The coaches, trainers, Otterbein players and all of the volunteers organized a great camp,” said LFG founder and Lafayette College defensive coordinator John Loose. “The event Otterbein University has helped orchestrate over the past two years will continue to grow to become a huge success in the future.”

During the one-day camp, players receive instruction in a variety of offensive and defensive skills from college coaches from around the country. More than 80 coaches representing colleges and universities from Ohio and neighboring states volunteered at the event. Ohio State Alumni Association President and two-time Heisman Trophy winner Archie Griffin was the featured guest speaker, stressing the importance of a college education to the crowd.

In addition to Ohio, the foundation raised more than $80,000 during its eighth annual football camp at Lafayette College in Easton, Pa. earlier in June. More than 1,800 athletes and 270 college coaches were in attendance for the event.

Created in 2004 by John and Marianne Loose in honor of their 14-year-old daughter Lauren, a pediatric brain tumor survivor, LFG has raised $223,000 this year and more than $1.5 million overall. Since its inception, the foundation has donated more than $800,000 toward the fight against pediatric brain tumors and cancer. This year’s grants will be announced in the fall.