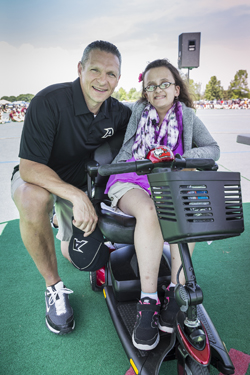 EASTON, PA (June 9, 2014) – After another successful football camp, Lauren’s First and Goal Foundation announced that it has raised more than $114,000 this year. Its 11th anniversary camp was held on Sunday, June 1 Lafayette College. Camper registrations and donations go directly toward the foundation’s mission of supporting pediatric brain tumor research, patient services and families living with the disease.

Lauren Loose, the 17-year-old pediatric brain tumor survivor for whom the foundation is named, delivered another inspirational speech encouraging attendees to use the gifts and skills they have been blessed with. Army coach Jeff Monken was this year’s featured guest speaker.

“This year's camp was a resounding success due in large part to the community of volunteers that come out to help year after year,” said John Loose, Lauren’s dad and co-founder of the foundation. “Lafayette was a tremendous host. The grounds crew worked extremely hard to prepare all the fields and Matt Bayly did another great job organizing all the volunteer trainers and doctors. The army of volunteers that set up and clean up during and after the camp, help park cars, register campers and get water to the fields worked hard all day to keep everyone else focused on football.

“It is a tribute to the college coaching profession that over 300 college coaches came out to donate their time and expertise for the cause. Lauren and Coach Monken both gave messages that were touching and inspiring and will leave a lasting memory for years to come,” Loose added.

More than 1,900 high school athletes from 16 different states traveled to the College’s Metzgar Athletics Complex to receive instruction in a variety of offensive and defensive skills from more than 300 college coaches from more than 100 schools around the country. A coach from the New York Jets and several coaches from the Kicking Connection also shared their expertise.

In addition to the Pennsylvania event, LFG will host its fifth annual Lauren’s First and Goal Football Camp Ohio on Sunday, June 22 at Otterbein University in Westerville, Ohio. Student-athletes can register online at www.lfgf.org.

The foundation has raised more than $1.5 million since 2004 as a result of tremendous community support and generous donors, with more than $1.3 million being dispersed to pediatric research, patient services and families. Follow the latest foundation news on Twitter and Facebook.