Home»Media Room»Luke Fickell Lfg Honorary Board
Error: linkLocal = 4, but newsLink is not a numeric spot. (newsLink = ) 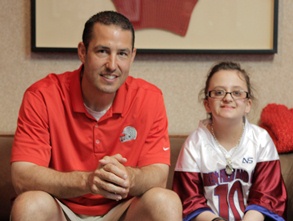 EASTON, PA (July 3, 2013) – Lauren's First and Goal is happy to introduce Ohio State University defensive coordinator Luke Fickell as its newest member of its Honorary Board of Directors. Fickell continued the foundation's long-standing relationship with Ohio State by speaking at this year's Ohio football camp held at Otterbein University on June 22.

"Coach Fickell personifies Ohio State Football and we are honored to welcome him to our honorary board," said LFG founder John Loose. "As a player, he started an Ohio State-record 50 consecutive games and he has served in virtually every position on the football staff.

"He is a caring, charismatic individual that will be a huge help in promoting and spreading awareness of Lauren's First and Goal in Ohio and the Midwest," Loose added.

A proud graduate of The Ohio State University, Fickell is now in his 12th consecutive season coaching at his alma mater, now serving in the position of defensive coordinator and linebackers coach. Fickell has been at Ohio State coaching since the 2002 season, and he was the first assistant coach named to Urban Meyer's Ohio State staff. Fickell was the team's head coach in 2011.

These gentlemen will help to promote Lauren's First and Goal's mission of providing financial support for brain tumor research and cancer services, offering financial and emotional support to families living with pediatric cancer, and increasing awareness of the disease.

This year's annual camp in Ohio welcomed almost 500 athletes and raised over $18,000. Since its creation in 2004, Lauren's First and Goal has raised more than $1.5 million.