Home»Lauren's Corner
Error: linkLocal = 4, but newsLink is not a numeric spot. (newsLink = )

Lauren was born with a genetic disorder called Neurofibromatosis Type I. NF1 is an autosomal dominant genetic disorder which causes tumors to grow along nerves and can affect the development of non-nervous tissues such as bones and skin. It causes tumors to grow anywhere on or in the body and may lead to developmental abnormalities. It is the most common neurological disorder caused by a single gene, affecting one in every 4,000 births. As a result of NF, Lauren developed brain tumors, bilateral optic and hypothalamic gliomas, just before her second birthday.

Lauren had been on chemotherapy for about four years, with periods of progression and stability, and development of a new lesion in her brain stem, when she developed Evan's Syndrome, a rare blood disorder in which the body makes antibodies that destroy red cells, platelets and white blood cells. Her chemotherapy for the brain tumors had to be discontinued, and a different chemotherapy coupled with synthetic steroids was introduced to try and control the blood disorder.

In the meantime, vision in her "good" eye had deteriorated. She started back on a new chemotherapy regimen in the fall of 2004. It kept her stable until January 2006 at which time scans showed that one of her tumors more than doubled in size. She was enrolled in a Phase I clinical trial of Lenalidomide from Jan. 2006 until March 2007, at which time she developed demyelination in her cerebrum and had to discontinue.

In March 2008 she was diagnosed with malignant peripheral nerve sheath tumor, an aggressive soft tissue sarcoma. She had two surgeries in March to remove the tumor and completed 7 weeks of radiation. In June 2008, she was diagnosed with severe Moya Moya disease, a progressive narrowing of the blood vessels that feed the brain, after having two strokes. She had a double craniotomy with a procedure called pial synangiosis at Children's Hospital of Boston in August 2008 to try and revascularize her brain. More recently, she was diagnosed with Myasthenia Gravis, an auto immune disease causing progressive muscle weakness and fatigue. She has been in and out of myasthenic crisis, and is in treatment with high dose steroids to manage her symptoms.

Like so many children battling brain tumors, both the disease and the side effects of treatment have taken their toll on Lauren. She is blind in one eye, and has visual deficits in the other. Her endocrine functions have been affected, requiring treatment, and chemotherapy has damaged some of the nerves in her extremities, causing neuropathic pain and requiring leg braces. Her permanent teeth are falling out because the chemo caused her teeth to develop with no roots. She lives with thyroid disease, ovarian failure, hypertension, hemiparesis and intellectual disabilities associated with traumatic brain injury. She has endured surgeries, needle sticks, port flushes, bone marrow biopsies, blood transfusions, chemotherapy infusions, radiation, long hospital stays, physical, occupational and speech therapies, and too many doctor visits to count.

Despite all she has been through, she is a happy, enthusiastic and optimistic child, with a crazy, infectious laugh and a true love for life. She takes great joy in helping others, finds treasure in what others may see as ordinary or mundane, and never lets a day go by without some kind of exciting discovery. No matter what challenges are placed before her, she never gives up. Her courage, resiliency and relentless spirit are an inspiration to those who know her. 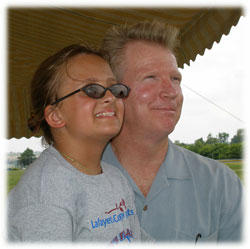 One person can facilitate big change. Often times it is the smallest of people who inspire that change.
Lauren inspires us every day with her resiliency, courageous spirit and joy for life. Those who know her often tell us that she has the power to turn their day around with her crazy laugh and infectious smile. Her happiest moments are when she is giving or helping someone else.

Today is living proof that each of us has something to contribute. Whether you are here to play football, volunteer, coach or just observe, you are part of a circle of strength and hope, that we want to continue to grow each year.

Thank you to our family, friends, all of the coaches, volunteers, participants and donors who helped to make this day a success. The endless and overwhelming outpouring of support, help and prayers never ceases to amaze us and always renews our faith in the true goodness and generosity of both friends and strangers alike. We sincerely appreciate your gifts of time, talent enthusiasm and support. We are committed to making a positive difference in the lives of children battling brain tumors and pediatric cancer, and we honor your commitment to helping us to make that change.