Home»Media Room»Obrien Meyer Honorary Board
Error: linkLocal = 4, but newsLink is not a numeric spot. (newsLink = ) 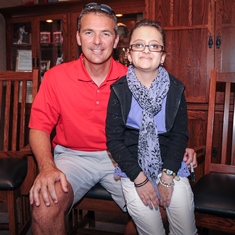 EASTON, PA (Oct. 18, 2012) – Lauren’s First and Goal Foundation is honored to welcome Penn State University’s Bill O’Brien and Ohio State University’s Urban Meyer to its Honorary Board of Directors. O’Brien and Meyer were the featured guest speakers at the annual LFG football camps in Pennsylvania and Ohio, respectively, this past June.

As honorary board members, both men have agreed to promote the foundation’s mission, which includes providing financial support for brain tumor research and cancer services, offering financial and emotional support to families living with pediatric cancer, and increasing awareness of the disease.

“We are grateful to have Coach Meyer and Coach O'Brien join the honorary board of directors,” said LFG founder John Loose. “Having both a National Championship- and Super Bowl-winning coach join the LFG team will be a tremendous boost to the foundation and camps.”

O’Brien, who is in his first season as head coach at Penn State, previously served as the Offensive Coordinator of the New England Patriots, where he was instrumental in helping New England earn a 13-3 record, the No. 1 seed in the AFC playoffs and advancing to Super Bowl XLVI last season.

A graduate of Brown University, O´Brien joined Belichick´s staff in New England as a coaching assistant in 2007 after 14 seasons on the staffs of Georgia Tech, Maryland and Duke.

Like O’Brien, Meyer is in his first season at the helm of the Buckeyes. Meyer spent the 2011 season an analyst with ESPN after six seasons at the University of Florida where the team won two national titles, two Southeastern Conference championships and had three 13-win seasons.

Meyer has also served as head coach at Utah and Bowling Green. Through 10 full seasons as a head coach, Meyer has the tenth-best winning percentage in major college football history with a winning rate of .814 (104-23).

O’Brien and Meyer are the seventh and eighth members of the foundation’s honorary board. Lauren’s First and Goal has raised more than $1.5 million in the fight against pediatric brain tumors since it was founded in 2004.