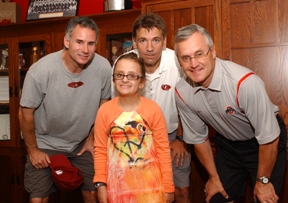 All proceeds from the camp benefit Lauren’s First and Goal Foundation whose mission is to provide financial support for brain tumor research and cancer services, to offer financial and emotional support to families living with pediatric cancer, and to increase awareness of the disease.

“Having worked previously on the East Coast, I knew about Lauren’s First and Goal, about how big it had grown, and what it stood for,” said Otterbein head football coach Joe Loth. “It was a great privilege for our school and coaching staff to host this event at Otterbein.”

The one-day football camp welcomed players from 190 different high schools and nine states for a day of offensive and defensive instruction from more than 75 volunteer college coaches. In addition, Coach Tressel was the featured guest speaker and addressed the campers during lunch time. He also spent time visiting with several pediatric oncology patients from Nationwide Children’s Hospital and their families.

“The community at Otterbein College, especially Coach (Joe) Loth and Coach (Allan) Moore, were tremendous and went out of their way to help make this camp a success in its first year,” said John Loose, who created Lauren’s First and Goal Foundation in honor of his 13-year-old daughter Lauren, a pediatric brain tumor survivor. “Having Coach Tressel there was unbelievable, from the time he spent with the oncology patients to talking to the campers.”

Earlier this month, the foundation hosted its seventh annual camp at Lafayette College in Easton, Pa. Nearly 1,700 student-athletes donated more than $67,000 as part of that event. The camps raise money through a $30 registration fee for each student-athlete as well as non-camper donations.

For the year, Lauren’s First and Goal Foundation has received nearly $250,000 in donations, including a $100,000 gift from the Center for Special Needs Trust Administration. The foundation has now raised more than $1 million since its creation in 2004. Of every dollar received, the foundation donates 90 cents toward the fight against pediatric brain tumors.